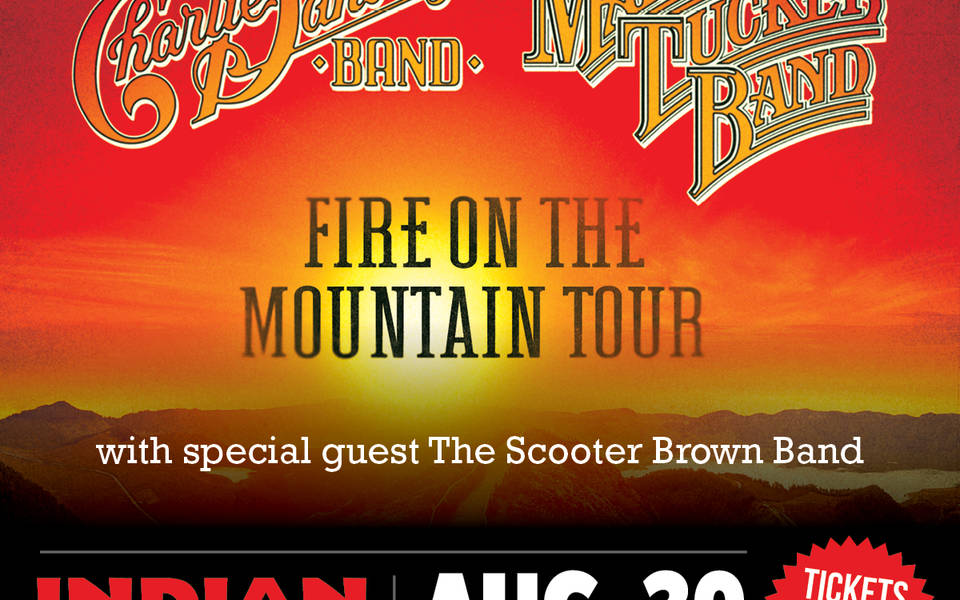 
The Fire On The Mountain Tour with The Charlie Daniels Band, The Marshall Tucker Band, and The Scooter Brown Band comes to Indian Ranch on August 30, 2020.

“We have played more shows with the MTB through the years than any other band and have worked together for over forty years,” adds Daniels. “We have so much history and so many memories and the music is so compatible that when we get together, the audience, CDB and MTB have a big ole southern-style good time.”

From his Dove Award-winning gospel albums to his genre-defining southern rock anthems and his CMA Award-winning country hits, few artists have left a more indelible mark on America’s musical landscape than Charlie Daniels. An outspoken patriot, beloved mentor, and still a road warrior at age 83, Daniels has parlayed his passion for music into a multi-platinum career and a platform to support the military, underprivileged children, and others in need. The Charlie Daniels Band has long populated radio with memorable hits and his signature song, “The Devil Went Down to Georgia.” Over the course of his career, Daniels has received numerous accolades, including his induction into the Country Music Hall of Fame, the Musicians Hall of Fame and becoming a member of the Grand Ole Opry. Daniels helps to shine the spotlight on the many causes that are close to his heart. He’s a staunch supporter of the military and lends his time and talent to numerous charitable organizations, including The Journey Home Project, that he founded in 2014 with his manager, David Corlew, to help veterans of the United States Armed Forces.

Nearly 50 years ago, The Marshall Tucker Band was founded in Spartanburg, SC. Thanks to hits like “Can’t You See,” “Heard It In A Love Song,” “Fire On The Mountain,” and “24 Hours At A Time,” the 5x Gold, 3x Platinum-selling Southern Rock group has sold millions of albums worldwide. MTB songs have been featured in major motion picture films and television shows including Breaking Bad, Blow, The Box, Swing Vote, Half Nelson, My Name Is Earl, Cold Case Files and Good Guys. CMT (Country Music Television) named the MTB’s “Can’t You See” the #4 Greatest Southern Rock Song. The MTB’s debut album, The Marshall Tucker Band, reigns as Gibson Guitar’s #5 Greatest Southern Rock Album. link crowned the MTB’s “Can’t You See” as the #1 Southern Rock Song and in 2013, GRAMMY® Magazine named the group’s logo as one of the most distinctive and iconic brands in music.