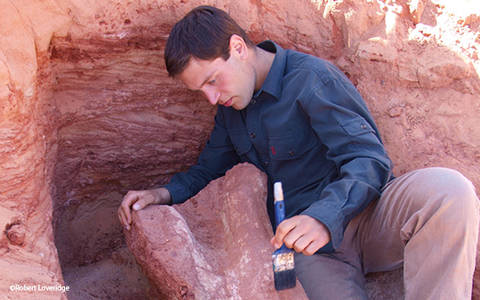 
Paleontologist Nizar Ibrahim introduces listeners to the largest predatory dinosaur yet discovered, even larger than T. Rex, and the incredible story of how this prehistoric giant was almost lost to science before it was brought back to light with the help of a remarkable young paleontologist.

Originally discovered in Morocco more than half a century ago by German paleontologist Ernst Stromer, Spinosaurus’ fossil remains were lost in the Allied bombing of Germany during World War II. But recent fossil discoveries in the desert, along with Stromer’s own data and drawings, helped Ibrahim and contemporary scientists reconstruct a full skeletal model of Spinosaurus, which has been featured on the National Geographic Channel and presented in the National Geographic Museum.

With amazing video recreating the lost world of the Cretaceous Era Sahara, Ibrahim tells the story of Spinosaurus’ discovery, loss and rediscovery, and explain what, other than its size, makes this ancient monster unique.

Presented in partnership with the Ecotarium

National Geographic Live is the live events division of National Geographic. Its broad roster of talent, including renowned photographers, scientists, authors, filmmakers and adventurers, share their behind-the-scenes stories from the front lines of exploration alongside stunning imagery and gripping footage to audiences throughout the United States and abroad.

See all three National Geographic speakers for just $95, or purchase VIP seats, including a meet and greet with all speakers, for $175. Single tickets for individual speakers go on sale in December. Contact the box office at link (7469) for more information.