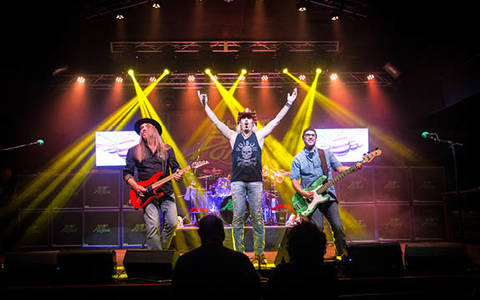 
Titans of '80s Rock features three amazing tributes to the best hair bands of the 1980s: Def Leppard, Bon Jovi and Poison. Expect a big-time arena rock party atmosphere as three incredible headliners deliver dozens of glam metal hits, all in one night, and have you rocking and reliving the excitement of that era!

Rock of Ages performs a stadium-level salute to the biggest band to emerge from the new wave of British metal. Hailing from NYC, this talented group of musicians has gone all out to meticulously reproduce the hit-making sound of Def Leppard. Performing a stunning show featuring all the songs you know and the deep cuts fans want to hear.

Hailing from all corners of New England and winner of Limelight Magazine's 2010 Tribute Band Of The Year, Bon Jersey has been playing to packed houses for the past 14 years. Frontman Joe Ventura gets mistaken for Jon Bon Jovi on a regular basis and has all the stage moves and signature sound down. Performing songs from the very first to the last Bon Jovi album, Bon Jersey provides the closest experience to actually seeing Jon, Richie, Tico, David and Hugh on stage. It’s a concert event not to be missed.

Shot of Poison: A Tribute to Poison as They Are Right Now

These skilled, veteran musicians have created the world's best, most authentic tribute to Poison, the phenomenal, fun-loving, L.A.-based rockers who burst onto MTV in 1987, put the word "glam" back into the entertainment lexicon and went on to sell over 50 million records worldwide. Shot of Poison nails the look and sound of Poison's energetic 2017-2018 tours, bringing a party atmosphere along with dead-on recreations of Poison classics.

Titans of ‘80s Rock is presented by Rock Stage Productions.

Tickets are $28, $33 and $39 depending on seat location, with VIP seats available for $59. VIP tickets include a guaranteed seat within the first six rows, a pre-show meet and greet with the bands, autographed pictures of the bands and a swag bag of merchandise. Discounts are available for theatre members. Please contact the box office at link (7469) for more information.