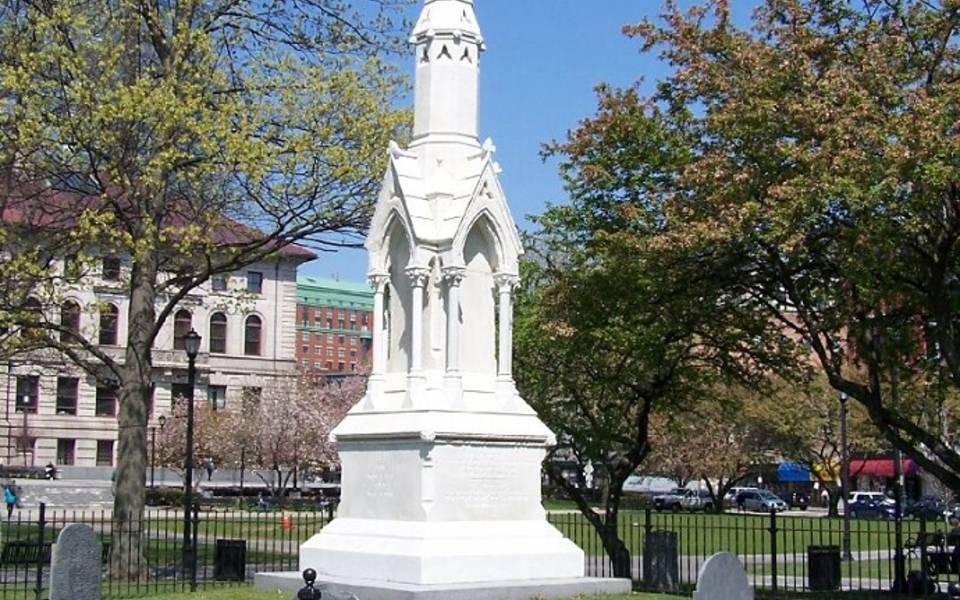 A large Gothic style monument in the Old Burying Ground honors Revolutionary War officer, Timothy Bigelow. A key figure in the emerging patriot cause in Worcester and Worcester County before the outbreak of the war, Captain Bigelow led the town’s “Minute Men,” who marched from Worcester Common to Cambridge in response to the Lexington alarm on April 19th, 1775. Rising during his period of service from the rank of captain to colonel, he was one of only a very few who served from the beginning of the conflict to the end. As colonel of the 15th Massachusetts Regiment of the Continental Army, Bigelow drilled his men so thoroughly that it is said that General George Washington, when reviewing Bigelow’s company, complimented him saying, "This is discipline, indeed." Col. Bigelow was with Washington at Valley Forge and fought in the decisive battles of Monmouth, and Yorktown. At the end of the war he was stationed at the military installation at West Point and was later placed in command of the national arsenal at Springfield, in western Massachusetts. Yet, Timothy Bigelow’s homecoming was not a happy one. Returning to Worcester in ill health after eight years of military hardship, he found his property encumbered in debt and his ability to work at his trade as a blacksmith seriously diminished. Unable to pay his bills and threatened with the loss of his home and property, Bigelow was sent to debtors' prison, where he died a short time later in March of 1790 at the age of 51. The Bigelow Monument on Worcester Common, a gift of his great-grandson, Colonel Timothy Bigelow Lawrence, was erected in 1861 to honor this courageous Worcester citizen for his role in the birth of our nation.