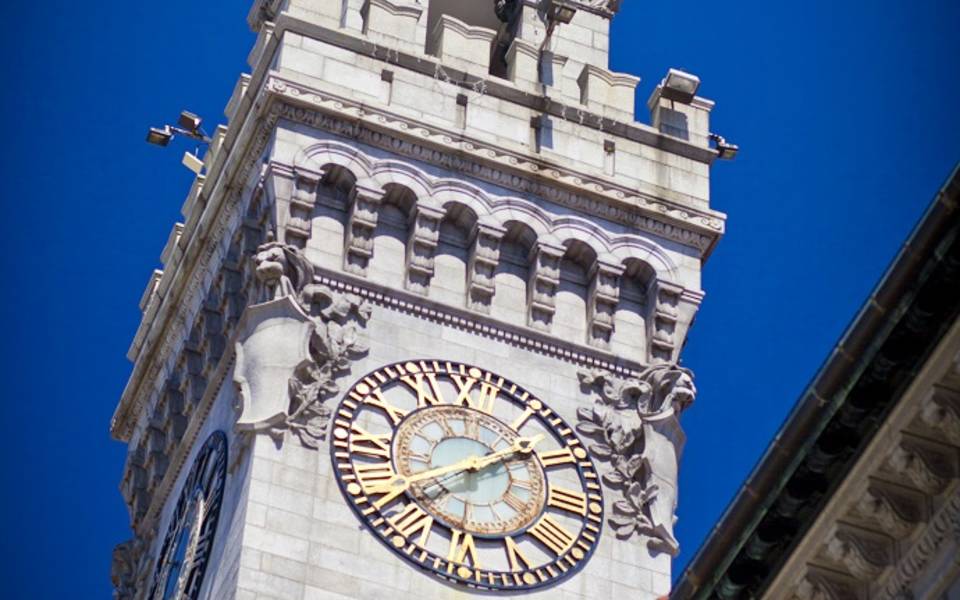 Built on the site of the 1763 Meeting House, Worcester’s new City Hall opened in 1898. This grand, elaborately detailed, Renaissance Revival style building is a symbol of the city’s wealth and industrial prosperity at the turn of the 20th century. Constructed of Milford pink granite, it was designed by the respected Boston architectural firm of Peabody & Stearns and built by nationally-recognized Worcester building contractors, the Norcross Brothers. An expression of power and strength, the soaring clock tower was modeled after the tower of Palazzo Vecchio (Pa-lat’-zo Vekk’-yo), the city hall of Florence, Italy. Rising 205 feet in the air and accented by medieval-style crenellated parapets, it is topped off with a “Witch’s Cap” at the skyline. At the grand entrance is a pair of gracefully curved staircases that lead to a covered balcony above, where, in the days before radio and television, city officials stood to address the citizenry. The building’s imposing design includes round-arched windows and doors and a profusion of carved Classical details. Look up to find symbolic lion’s heads, a spread-winged eagle over the entrance, and a wreath of flowers and fruit at the base of the clock tower. Also, look for a heart in the center of a wreath – a reminder that Worcester is the “Heart of the Commonwealth.” Built at the height of the city’s industrial success, City Hall is truly “a palace for the people of Worcester.” While standing back from the entrance to City Hall, look down and you will find Worcester’s smallest monument. Fixed in the pavement are a bronze star and a small bronze plaque. The star marks the spot where the Declaration of Independence was first publicly read in New England on July 14, 1776. 6 When a special messenger paused for refreshment in Worcester while carrying a copy of the Declaration from Philadelphia to Boston, the town’s patriot newspaperman, Isaiah Thomas, obtained the document and read it aloud from the western porch of the Meeting House. The Meeting House was taken down in 1889, but the star serves as a reminder of this historic event.